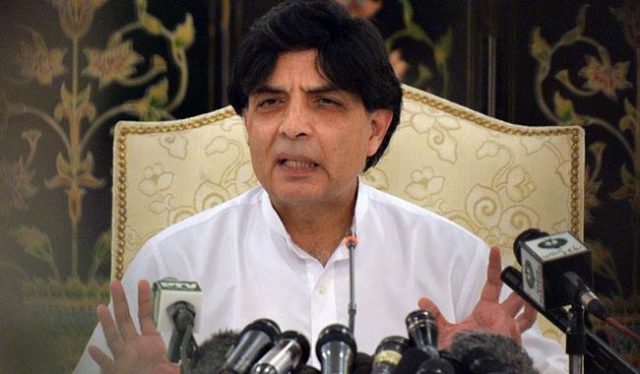 Addressing a public gathering at Chakri, the former interior minister said when the PML-N was established it had only 15 or 20 members.

Ch Nisar asked the young generation of his constituency to stand up for a change in society. He said July 25 would be the day of change and people would get rid of the traditional politics of non-eligible politicians.

“Nawaz Sharif was neither a senior member nor eligible to lead the party but we had no other choice.” He said either those senior party members left the party or Nawaz left them.

Ch Nisar said for 34 years he carried the burden of Nawaz Sharif. “I don’t owe him anything but he (Nawaz) is indebted to me,” he said.

“There are many things which I wanted to share with people about the inner politics of PMl-N and the role of Nawaz Sharif and his daughter Maryam Nawaz. But due to the critical health condition of Begum Kalsoom Nawaz, I will not speak about it publicly.”

He said it was possible that he may part ways with Mr Sharif. “I never compromised on my principles nor I ever sold my conscience,” he said, adding he was answerable to Allah, the public and Mr Sharif.

During the address, ‘Go Nawaz Go’ slogans were chanted but Ch Nisar stopped the participants and said: “Those who say ‘give respect to vote’ asked me not to contest the election. But I will contest and will respond to my opponents on July 25 about this.”

PSO has introduce RON 97 Petrol in the Market

Pakistani Duo Has Made an Urdu Speech Therapy Platform for Kids