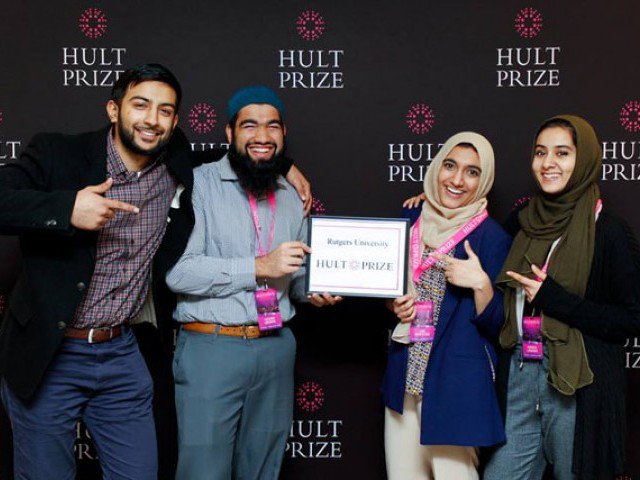 Four Pakistani-American students have won the prominent Hult Prize in the US for their social start-up, ‘Roshni Rides’, to empower refugees around the world.

The Hult Prize which comes with a $1 million award in seed capital will help the young entrepreneurs make their dream a reality with Roshni Rides — a transport network for refugees connecting them to critical services such as hospitals, jobs and schools.

“There are no words to express how happy, excited and blessed we feel after being presented the award to restore the dignity of refugees”.

the team posted on their social media page after the big achievement.

All four team members plan to relocate to Pakistan, where the team will spend the first two months piloting the business in the deprived Orangi Town area of Karachi where an estimated 2.4 million people live. Interestingly, the idea was inspired by Barkat Ali, a former resident of Orangi and family member of one of the team members.

Roshni Rides aims to run solar-powered electric rickshaws on a systematic route, with strategic stops near work, hospitals, schools and markets. Inspired by the New York City subway, the team aims to provide refugees a consistent and affordable transportation service.

Farooqi, 22, said the refugee-focused challenge was a political as well an emotional problem because of the global refugee crisis. “Being Muslim, and feeling very connected to our global Muslim family, it just became something that was so much more than a competition,” she explained.

The team is eager to solve the problems of accessibility, affordability and safety related to transportation. “Our renewable energy and business model enable us to have a competitive advantage that is unmatched in the region.”
The Hult Prize is considered the top student competition in the world. After several stages of competition, six finalists including Team Roshni Rides were selected from more than 50,000 applicants from more than 100 countries.

Former US President Bill Clinton, a key Hult Prize partner, declared Roshni Rides the winner of this year’s challenge held at United Nations headquarters in New York City. “This is a private solution to a public problem that will have a big impact,” he said.

Diversity and innovation are among the Hult Prize’s defining pillars, according to CEO Ahmad Ashkar. “We looked at the refugee crisis and thought, How do we convert the problem of the crisis into an opportunity?” he said. Ashkar said he’s hopeful that the challenge winners’ influence will extend beyond “just the direct outcome on refugees”.

What Is the Narrative Design of Composing?

Physics and Chemistry: No Longer a Mystery

Operate the World-wide-web to have Economics Task Assist