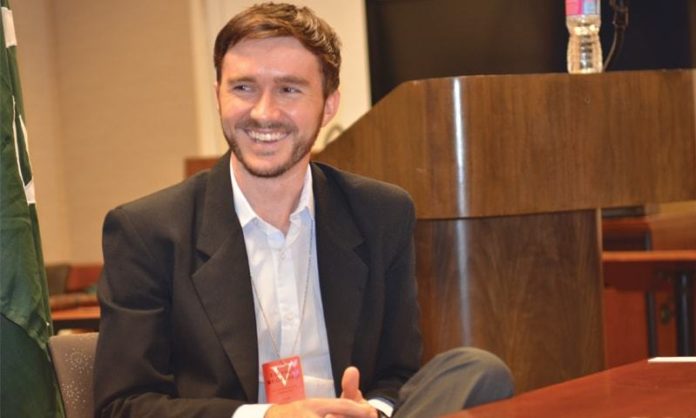 BUILDING start-ups is a risky business. Seven to eight out of 10 don’t end up being successful. That’s how it works in a healthy, functioning economy.

But a country needs an ecosystem that supports entrepreneurs who try and fail.

The good thing is that this culture is flourishing in Pakistan, according to Andrew Scheuermann, co-founder and CEO of US sensing automation company Arch Systems.

Though a lack of financing is a big issue in the country, Andrew Scheuermann believes good entrepreneurs can use whatever they have to start creating value and multiply

“There are many parts of a functioning ecosystem. Some of those are clearly happening in Pakistan,” Mr Scheuermann told in a recent interview.

Mr Scheuermann, 28, is a recent PhD from Stanford University and was one of the early team members who built StartX, considered one of the top start-up accelerators in the world.

He believes Pakistan is going in the right direction as far as the start-up culture is concerned, saying that he has been “very impressed” with the entrepreneurial spirit in the country.

“At the end of the day entrepreneurship is driven, more than anything else, by the entrepreneurs, not by the investors. It’s driven by entrepreneurs who create opportunity and who find needs that they want to satisfy,” he says. “The competition from great ideas and energetic people drives the ecosystem. And that is the part that is going best in Pakistan.”

Mr Scheuermann is on a visit to Pakistan under the US Embassy’s Entrepreneurship Speaker Series. He has been meeting young entrepreneurs in Islamabad, Lahore and Karachi, giving them tips about raising and managing funds for their ventures.

Emphasising on the qualities of a good entrepreneur, he says two common values are persistence and resourcefulness. Good entrepreneurs know the problem they want to solve, and they don’t give up even if the current solution is not the right one. They keep trying until they solve the problem.

In Pakistan, a lack of access to finance is a major issue for young entrepreneurs. Most commercial banks prefer to invest in risk-free government notes and bonds and avoid loans to the private sector.

However, Mr Scheuermann says good entrepreneurs know how to create value with little resources. “You don’t need million-dollar financing to build a company. You can have $50. Whatever you have available to you, you can use it to start creating value and multiply,” Mr Scheuermann says.

Another issue is that though a lot of young people want to try their hand at entrepreneurship, they don’t know how to get started. Nearly 23pc (or around 12 million) young Pakistanis want to start their own business but “are clueless on the procedures and requirements”, says a 2016 report of by start-up accelerator Invest2Innovate quoting the data of United Nations Development Programme.

However, incubators like The Nest i/o, Plan9 and Seed Ventures, and accelerators such as Invest2Innovate, Telenor Velocity and PlanX are trying to change that by helping start-ups grow.

Another key trait of an entrepreneur, Mr Scheuermann says, is self-learning. The biggest thing you can do to advance your career is to start figuring out how to teach yourself, how to use internet, books, mentors and the people around you to learn what you need to know. “We are born self-learners. You have to remember and foster it,” he says.

He is optimistic about the start-up scene in Pakistan and believes the country can certainly produce a unicorn — a term that refers to a start-up valued at over $1 billion (think of Uber, Airbnb and Pinterest). “There are 200 million people in Pakistan. It’s a very good size. Less than one per cent of them have a PC internet, but now 42m, almost a quarter, have mobile broadband and [the number is] growing fast,” he says.

So, if somebody in Pakistan makes a new mobile app that charges an annual fee of only $1 per user for its services, and he or she manages to capture 10pc of just the mobile users in the country, the app is already making $4m a year right now. “That’s enough not just for a very big Pakistani business but to go internationally,” he says.

He tells budding entrepreneurs to not be afraid of failure. “If you do something that has a high risk, there has to be a chance of failure, or you are cheating. That’s the way it works, that’s the way it’s always worked,” he says. “If nobody can fail then it wasn’t high risk, and then there shouldn’t be a chance to make a really big return — unless you have corruption.”

But there are different kinds of failures. There are failures because you stop trying. That’s always bad and it hurts the ecosystem, he says.

On generating ideas, he says one way is to make a list about the things people and businesses do and then make another list of how those could be changed if everybody has a mobile device.

Mr Scheuermann is also a strong proponent of creating value and not just money. “Money is the lifeblood of every organisation. Without money your organisation dies, but money is not the reason that you live. If money is the reason to start a company, it’s like saying ‘I live to eat food’.”

How to create a fantastic Higher education Essay