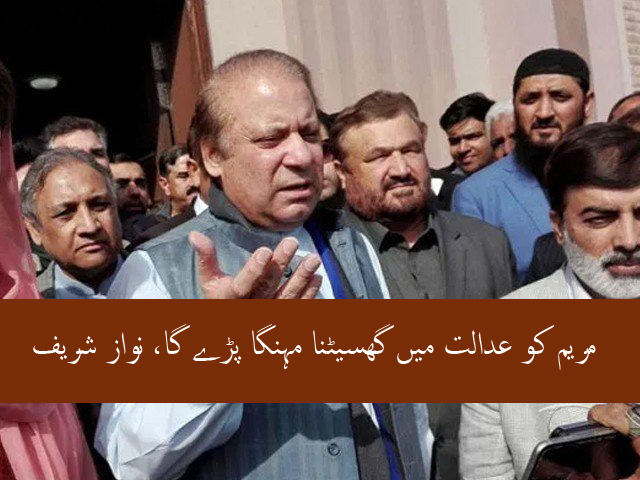 Islamabad: It will be expensive to drag Maryam in court, Nawaz Sharif said during media talk outside of NAB Courts where he has to appear for corruption references.

Mian Muhammad Nawaz Sharif is a Pakistani businessman and politician who served as the Prime Minister of Pakistan from 2013 until he was disqualified for life from office by the Supreme Court of Pakistan in 2017. He had previously served as the Prime Minister twice in the 90s (1990–93 and 1997–99) and the Chief Minister of Punjab from 1985 to 1990. He is Pakistan’s longest-serving prime minister.

Born into the upper-middle class Sharif family in Lahore, he is the son of Ittefaq and Sharif Group founder, Muhammad Sharif, and the elder-brother of three-time elected Punjab Chief Minister, Shehbaz. According to the Election Commission of Pakistan, he has a net worth of PKR 1.6 billion. Sharif studied business at Government College and later law at the University of Punjab before entering politics in the later 1970s.

In 1981, Sharif was appointed by Zia-ul-Haq’s regime as the Minister of Finance for the province of Punjab. Backed by a loose coalition of conservatives, he was elected as the Chief Minister of Punjab in 1985 and re-elected after the end of martial law in 1988. In 1990, Sharif led a conservative alliance to victory and became Prime Minister. Later it was alleged that the election was rigged in favour of Sharif by the Pakistani intelligence agency, the ISI, channeling millions of rupees into his election campaign.